Classifying men and women is a categorization problem, and to do any categorization, we need to know what defines their similarities and differences.

This is the work that Aristotle was doing in Generation of Animals; attempting to establish that men and women were of the same species, and additionally to describe the differences.

He began with the prevailing Western theory: that all differences between entities were caused by changes in energy (or temperature). Heat caused transformations (destruction, reproduction, etc.) whereas cold caused things to stagnate and slow down. This was similar to the elemental (earth, wind, fire, water) rubrics that were also in use at the time. 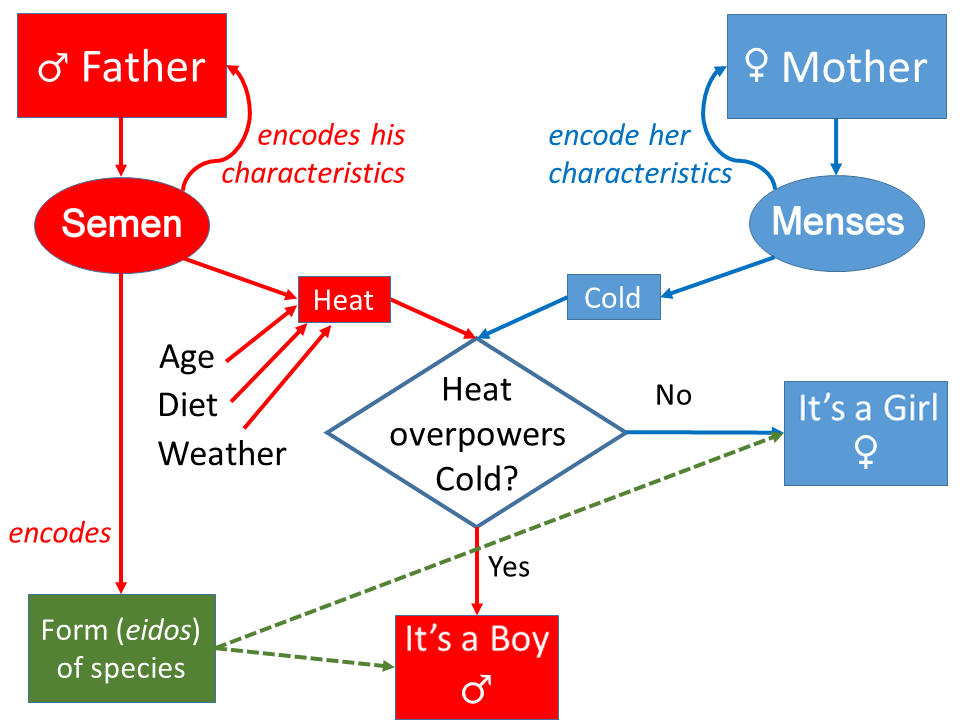 (By Chiswick Chap (Own work) CC BY-SA 4.0, via Wikimedia Commons)

Using this framework, Aristotle theorized that there is a perfect definition, called a form, for each object in reality, and reality consisted of mostly-imperfect replicas of that form (a theory called hylomorphism). Differences in function resulted in alternative definitions/forms. He then investigated the variations between the the fluids men and women produced as a starting point for his theories on the differentiation of sex.

The prevailing theory of the time stated that menstrual blood/fluid was the female equivalent to semen, partly based on the temperature difference between menstrual fluid and semen. This makes the fluids the same in form (definition), but different in reality (matter). Aristotle built off this work to try and determine why there was a difference in matter.

Building on the theory that the fluids were the same in form, Aristotle argued that men and women did not differ in their functions, but only by accident of creation. He accepted there are differences within male and female, but believed they were due to imperfections in the ways that people are born. Since most scholars believed the function of humankind was to reproduce, this meant that the men with the hot semen (who controlled reproduction) were more perfect replicas of the form of a human.

These “accidents of creation” were due to the heat that was available during procreation. If a man had children that looked exactly like them, that meant that the father was viral and hot; in other words, the man could exact his will on creation. It is noteworthy that Aristotle’s theories allowed for men to have variable will-power, such that a man could have a perfect child one time but imperfect (female) the next.

The idea that women are an imperfect version of men, and that men are the aggressive decision makers of creation is a narrative that is still propagated. The idea that men are naturally aggressive, that they control reproduction, that the sperm fight for the egg are all ideas that stem from Aristotle’s original ideas about sex. This model is generally considered to be the “one-sex model” since it states that there is one type of human, and variations in sex are accidental.

Unfortunately (or fortunately) there is a contradiction in this theory:

(Also, menstrual fluid is not similar to semen.)

Despite the flaws in this theory, students are still taught about the aggressive nature of sperm and the passivity of the egg (despite research to the contrary), women are still thought to have little control over reproduction, and the one sex model still influences modern ideas of medication and treatment.